on the 4-pack bomber box:

“Blaze one down as you sip on this tawny IPA that has enough malt character to balance out the massive amount of hops in this beer. You down with H.O.P? Ya, you know me.” 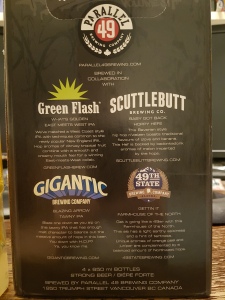 Visual: In a mixed 2017 4-pack of bombers. Pours clear copper orange without much of a lasting head, ringed retention, countable clustered fast streams.

Summary: A good 60/40-malt-citrus hop balance with a decently smooth and fullish mouthfeel.