“Waes Hail! To your health! Spiced with orange peel and star anise (now cloves), our Wassail spiced cider harkens back to the wassailing tradition of drinking spiced cider and singing to the apple orchard. This scared away evil spirits to ensure a bountiful harvest. Raise a glass of Wassail to good health, a good harvest, and good cider!

Sea Cider’s Owner Kristen was inspired to create a traditional winter warming cider that embodied all the traditional Wassail characteristics and leant itself to the traditions of wassailing. Wassailing refers to drinking and singing to the health of an orchard. An ancient practice from southern England that’s still performed at Sea Cider Farm & Ciderhouse today. The purpose of wassailing is to awaken the cider apple trees and scare away evil spirits ensuring a good harvest. Wassailing also refers to the tradition of raising a glass with good friends and neighbours in celebration of the season.”

This winter warmer is perfect just as is, or paired with your favourite seasonal dishes. The candied orange peel, caramel apple aromas and flavours, and hints of clove and cinnamon make this perfect for pairing with sausages, sausage meat stuffing, roasted pork, duck and of course turkey. A great fit for all your traditional sides too: garlic mashed potatoes, braised winter vegetables, and roasted turnips. The spices ensure it’s also ideal with strong cheeses, apple pie, apple crisp, pumpkin pie and of course Figgy Pudding.

Visual: (old labeling prior to 2015, cellared for 4 years). Pours clear orange amber with no head, lots of slow and steady micro streams.

Summary: Lots of spices augment the clean apple backbone in this one, making it quite an interesting cider. It drinks something like a mead but lighter 0n the palate, especially at the finish. Beautiful aroma.

-Summary of the four hop varieties:

“…Each  IPA contains the same malt backbone and is brewed to be 75 IBU and is enthusiastically kettle hopped and dry hopped with Waimea, El Dorado, Dana & East Kent Goldings…”

“A pseudo noble hop. Noble like a mother fucking king. But not a boring king. Noble like a chain smoking, pimp of a pinball wizard king. Apparently, they are the best kind.
Hailing from Slovenia, Dana was originally cross bred from the German Hallertau Magnum and native Slovenian varieties. Like any good faux noble hop should it infuses a rustic, musty spiciness into a classic beast of a malt base, just like your grandfather’s old school aftershave.
This hop of Eastern European origin is best enjoyed whilst dreaming up a song about a lovely donkey that fell in love with a princess that is destined to take the Eurovision song contest by storm.”

Summary: Smooth drinkability just like the rest of their single hops. Half grassy, half mango toffee malt character. Pretty good. 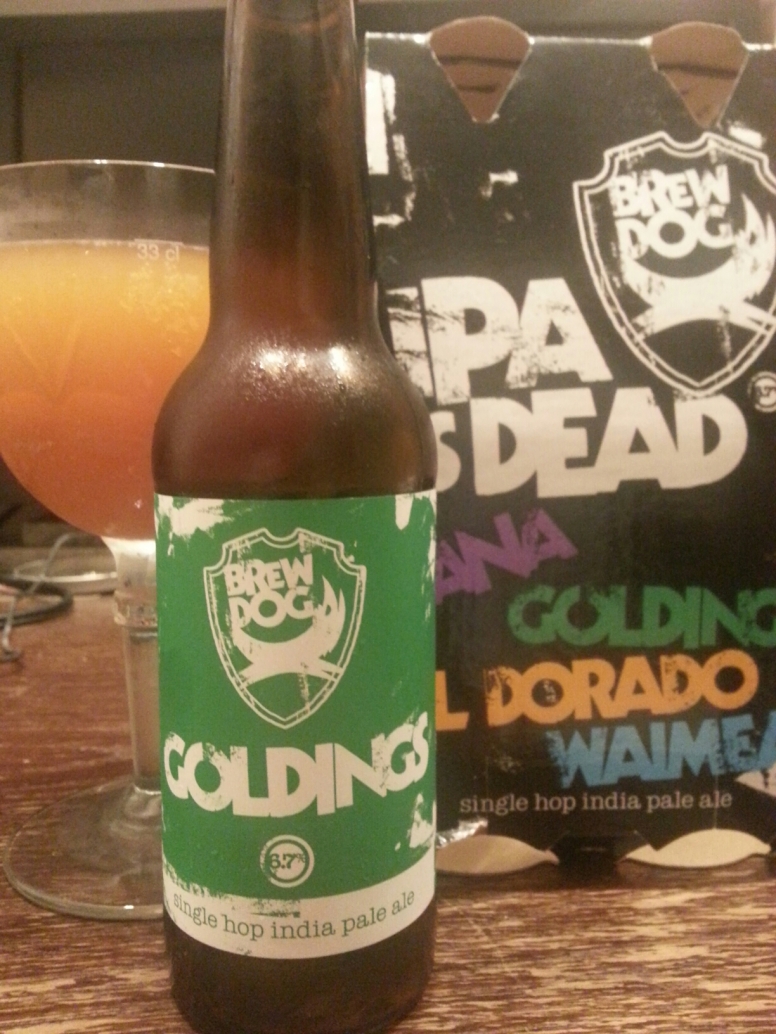 “Good old East Kent Goldings. Elegant and refined and like a quintessential English gentleman, inherently boring. Boring that is unless you put the amplitude into overdrive and hope the living daylights out of the beer with it.  This is East Kent Goldings re-invented and re-imagined and shows just what can be done with English hops if you use enough of them. An often overlooked hop superstar, normally getting lost in a woeful stream of conformist brown ales made by sleepy cask ale brewers. But not anymore. Classic Empire with an anarchic twist. God save the Queen. In this amped up Goldings reincarnation expect to be slammed with floral lavender, a fruity riot of blackberries and spiced pears, bumble-gum plums and the illusion of thyme. It reminds me of the apricot marmalade by grandmother used to make. ”

Visual: (Cellared for 2 years). Pours pale orange-brown with suspended sediment, no head, a few big bubbles on the surface, no activity.

Summary: Slightly heavier on the palate than the Waimea and El Dorado, fantastic distinct blackberry aroma.

“The Pacific North West of America is home to the brand speanking new El Dorado Hop. America is not just about cheer-leaders, a silly version of football, elastic top jeans and cheeseburgers. They grow remarkable hops and El Dorado is a killer example of this, embodying all that is good about American hops and then some. A new hop on the block, it may even seduce you into thinking the American Dream is not just a catch phrase to sell movies and elect Presidents. Fearfully hard to resist, this beer is loaded with tropical fruits, pear, watermelon, candy floss and stone fruit. Devilishly moreish.”

Visual: (Cellared for 2 years). Pours cloudy brownish-orange without a significant head, a clump of bubbled retention, virtually no activity.

Summary: Drank after Waimea in the same session. More malt forward initially, brighter stone fruity mids with much softer hopped bitterness in the finish. Lots of fruit but less length of flavour.

“Waimea is a new hop variety that has both aroma and bittering capability, and is the granddaughter of Pacific Jade. Pacific Jade is also a hop, not a hippy belly dancing gypsy on crack.
It has been described as having intense fresh tangelo, citrus fruit and pine needle characteristics,
High on it’s own alpha, Waimea has a new world flavour, infusing unique fresh crushed citrus aroma and flavour notes into this IPA. Sharp as a razor, this New Zealand hop slices your taste buds with intense fresh tangelo, citrus fruit and pine needle characteristics There is a huge depth flavour with astringent gooseberry balanced against the robust malt base. Throw another shrimp on the Barbie mate and you are all set. New Zealand is near Australia, right?”

Summary: Good smooth mouthfeel with very nice light drinkability. It doesn’t drink as thick nor heavy as it smells.

Summary: Plain barley malt flavour with a touch of honey, not much character other than the very lively crisp fizzy mouthfeel. Just an average blond.

-for comparison here is the review of their Little Dry Cider [C+].